The 60th anniversary celebration of the Norway House Fishermen’s Co-op was held in Norway House on August 11, 2022 to celebrate the hard work and dedication of many generations of fishermen since 1962.

The event was organized by the Norway House Fishermen Co-op’s board, administrators and staff, who wanted to honour and thank the fishermen, the staff of the co-op and the community and family members who support them.   They hosted a community feast, presented awards, congratulatory speeches, had live entertainment which lasted all day and took place in the Norway House Cree Nation Multiplex arena.

Communities Economic Development Fund (CEDF) attended this special event including Chris Thevenot – CEO, Tom Bignell – Fisheries Loans Officer and Kurt Thibault – Loans Officer.  “It was a privilege to be invited to Norway House Fisherman’s Co-op 60th Anniversary Celebration.  Employing over 200 people through all their operations, the co-op not only provides an enormous economic impact to the area but to the entire region,” said Chris Thevenot, CEO. “It was a way to give back to the community, for the co-op to thank the community because the community supports their businesses,” said Kurt Thibault, Loans Officer. CEDF is a Manitoba Crown Corporation that has lent over $100 million in commercial fishing loans to fishermen across Manitoba since 1993, including over $4.5 million in loans to over 400 fishermen in Norway House between 2008 and 2021.

Family members of the fishermen who have deceased were presented with a gift along with retired and current fishers on behalf of the co-op. The presenters acknowledged and honoured the original founding members of the Norway House Fishermen’s Co-op. The fishermen of Norway House have achieved a lot in 60 years.  The co-op has supported many generations of local fishermen.  It has been so successful that it has expanded beyond that and directly or indirectly employs over 200 people in Norway House. 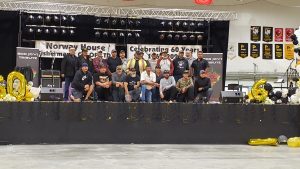